Stowe Theatre Guild, which began as the Stowe Playhouse in 1957, has been performing on the second floor of Stowe's historic town hall building for over 25 years. This partnership has ensured high-quality theatre entertainment for the Stowe community and visitors from all over the world.

When you walk through the front doors, you face the memorial plaques to Civil War veterans Healey Cady Akeley and Henry G. Thomas. Back in 1901, Thomas was collecting money for a Civil War monument and asked his friend for a donation. Instead, the millionaire Minnesota lumberman, who was born in Stowe, said, “It was better to build something for the living ... Build it well, and build it nice, so that the town won’t be ashamed of it in a hundred years.” 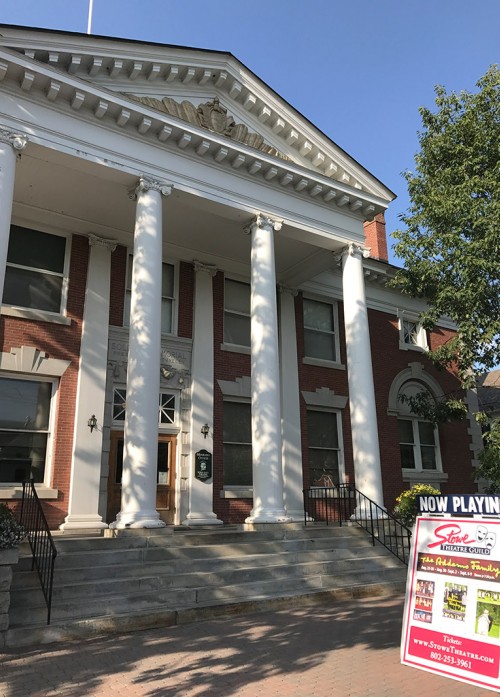 The generous donor ended up paying $48,000 for a multi-use community center: Town Clerk’s office, fireproof vaults, post office, a reading room and library stack room, and in the basement, two cells, toilet room, Justice court room, parlor banquet hall, serving room and kitchen, and a ladies parlor and cloakroom. The heart of the building remains Soldiers Memorial Hall, with the names of the 246 men from Stowe who fought with the U.S. Army in the Civil War engraved on marble tablets.

On the second floor was what a newspaper described as a “beautiful little opera house, capable of seating six hundred people and thoroughly up-to-date in its accessories and equipment ... The decorations are said by many to be the finest in the State.”

The first show followed the building’s dedication on Aug. 19, 1903, with matinee and evening performances of A Noble Outcast by John Arthur Fraser.

The drop curtain with a scene of Lake Mansfield has disappeared, the ticket office and gentlemen’s and ladies’ coat rooms outside the auditorium have been turned into an office and an elevator, but some of the original decorations remain. Take a look at the unique happy and sad self-portraits by the unknown artist on the right-hand side of the proscenium, instead of the usual classic comic and tragic theatrical masks.

Since 1903, the theater has been used for school plays, graduation and class-day celebrations, lectures, town meetings, speaking contests, concerts, dances — even silent movies with piano accompaniment in the 1930s.

The History of Stowe Theatre Guild

Stowe Theatre Guild has its roots in an old barn that was bought in 1957 and became a playhouse in the summer. The Stowe Playhouse opened with Bernadine and plays changed every week for 10 weeks. In 1964-65 Jim and Tish Leahy built the Stowe Playhouse, which became the Rusty Nail Saloon in the winter. Little Mary Sunshine opened the season. Morgan Freeman came from New York City to play the sailor in A Taste of Honey in 1967. Shows continued until 1970. The Green Mountain Guild produced for several years using professional actors, among them Meryl Streep. Stowe Theatre Guild began in 1984 as Stowe Playhouse, Inc., and acted as a booking agent and landlord.

Then came the fire of March 1994, which destroyed the playhouse. From the ashes of the fire came a new name, venue, and challenge. The Stowe Playhouse became the Stowe Theatre Guild, contracted with the Town of Stowe, moved into Town Hall Theatre in the summer of 1995, and began producing shows for the first time. The Guild is honored to continue entertaining thousands of local residents and visitors each season in this historic space and keeping summer theater alive in Stowe.