Stowe Theatre Guild’s final show of the season, the compelling courtroom drama A Few Good Men, is centered on the court-martial of two Marines for the murder of a fellow soldier at Guantanamo Naval Base in Cuba.

Playwright Aaron Sorkin explores themes such as a moral code of conduct and taking action for, what one believes to be the greater good. Although Sorkin could not foresee the current political landscape, with themes of civilian oversight of the military and the possibility for abuses of power, the characters, observations and situations are as relevant today as they were when he wrote this thirty years ago. 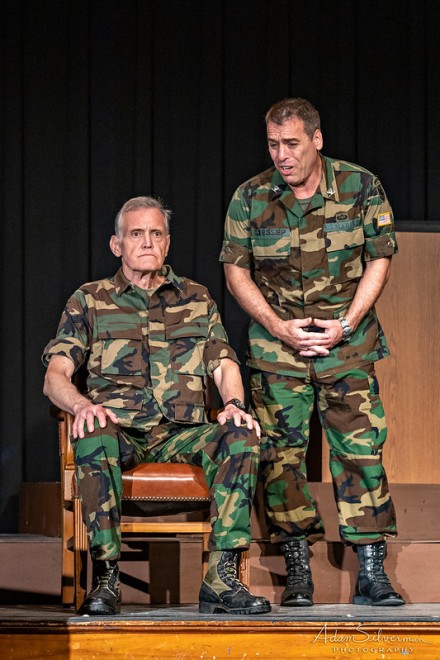 When delving into the military aspect of the show, cast members Mark Houle and David Lagala add a personal element to their roles; both have served in the military.

Houle enlisted for the first Gulf War in 1991 and served in the 82nd Airborne Division as an anti-tank heavy weapons infantry paratrooper, and later as a medic in the Vermont National Guard from 1991-2005. Houle has served on four continents, received specialized training from the British Paratrooper school, and has made more than 100 jumps from planes, helicopters and balloons.

“I find that Aaron Sorkin writes so insightfully about the pressures and externalities of a highly disciplined Marine Corps in its attempts to never falter from reaching the mark of perfection.” Houle said. "He embodies the spirit of both the infantry and the non-military perspective of flawed human beings."

Playing Captain Matthew Markinson, David Lagala of Waterbury trained for two years at a number of U.S. bases in preparation for his deployment to Vietnam. He shares, "I was in the active duty military from 1966-1970 and served two tours in Vietnam as a medic. Because of my classification, I was in high demand and called upon to support many different units in combat: Marines, River Patrol, Navy Seals, Sea Bees and others."

Both men share a similar sentiment: that being part of the cast of A Few Good Men brings up memories of their own experiences.

Lagala adds,”The play brings back several strong memories of enlisted men and officers with whom I interacted both here and 'in country.' I see aspects of our characters in those men. After more than fifty years, I am finding it enjoyable and gratifying to revive and relive some aspects of my memories. I like to think that my performance, in some way, honors the seven friends (lost in the Vietnam war) who died young.”

The dialogue really brings me back to my military service. It feels like I have made a trip back in time.
— Mark Houle (Lt. Col. Nathan Jessep)

A Few Good Men at Stowe Theatre Guild runs through Oct. 12. Performances are Wednesdays through Saturdays at 7:30 p.m. at the Town Hall Theatre, upstairs in the Akeley Memorial Building at 67 Main St. in Stowe.

Next Blog Post
Joanne Galloway (played by Athena Furioni) refuses to be intimidated among all the male military officers in A Few Good Men.